You’re probably familiar with the hazards of having your property contaminated by the HIV virus via blood, needles, or other possible sources, but there’s another very deadly virus currently making the news that isn’t so familiar: the hantavirus. Just yesterday several news outlets reported on the death of a North Dakota woman from hantavirus.

What is the hantavirus?  Actually it is an umbrella term for a number of similar viruses that can be deadly. Acute respiratory failure can result.  First detected in 1993 in the southwest U.S., it has claimed the life of over 700 individuals. Almost all of the cases have been in areas west of the Mississippi River. Over one-fourth of those have been in the Pacific Northwest states of Washington, Oregon, Idaho and Montana. 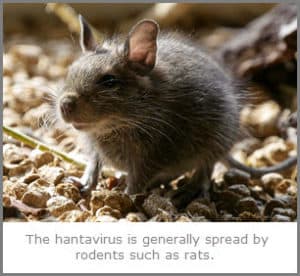 Generally the virus is carried by an otherwise healthy rodent such as a rat.  The virus can be transmitted by contact with bodily fluids from rodents (feces, urine, or saliva).  What is especially concerning is that the virus can become airborne when these fluids are disturbed by cleanup actions like vacuuming or sweeping. Simply inhaling dust could lead to a severe respiratory infection called Pulmonary Hantavirus Syndrome. This afflicts anyone – even otherwise healthy individuals.

That’s why it is critical to have a professional biohazard cleanup company like ours come in and deal with property that has been infested by rodents. For your own safety, you MUST assume those rodents were carrying the hantavirus.

What can you do?  If there were or are rodents around your home or other property, we highly advise you seek medical testing to determine whether you’ve contracted the hantavirus. Next, contact a biohazard cleanup professional to have your property decontaminated properly.

Rodents in your Pacific Northwest property?  Contact our team of trained biohazard cleanup professionals today through our online form.  Call us at (877) 684-9753.  Our phones are manned 24/7.

The Basics of Biohazard Cleanup