The recent outbreak of typhus in the Los Angeles area has people concerned about the health threats of rodent infestation.  The rodents we’re talking about include mainly rats, mice, and squirrels.  (But the rodentia classification also includes chipmunks, beavers, porcupines, prairie dogs, and even guinea pigs.) For the purposes of this post we’re confining ourselves to the first three we named. 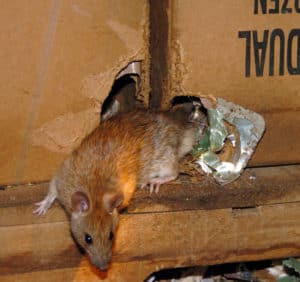 People are wise to be considered about the dangers posed by rodent infestation. In cold weather it’s especially important to be aware of the threats, because as the temps drop, these critters look for a warm and dry place, and they are notorious for being able to squeeze into very small areas.  A crack in a siding or a small pipe might be all they need to gain entrance to your home or office building.  The stereotypical ‘squirrels in the attic’ is so well known because it happens often.

Yes, rodents do bite; they gnaw and can cause physical damage, and they leave a mess, but it’s far worse than that.  As the typhus problem shows, they can also transmit bacterial and viral disease.

It is estimated that over 21 million rodents seek refuge in American homes each winter.

That’s a lot of mouse poop. And it’s those droppings they leave behind that pose the most health problems.  Rodent feces can carry harmful bacteria.  That’s why food inspectors are so fanatical about exterminating rats and mice in food establishments.  But you don’t have to eat food contaminated by rat droppings to be affected.  Once rodent droppings are dry, particles can become airborne, transmitting those bacteria.  This is a particular problem for those who may be allergic to rodent feces.

And it’s not just their droppings that pose a health threat; rodent urine and saliva can also carry viruses and other diseases. Some are transmitted via rodent bite. With typhus, the culprit is a flea that lives on rats’ bodies. It can also be transmitted via feces from a rat infected from bites of contaminated fleas. In total, they (or the fleas and mites that afflict them) are known to carry at least 35 diseases. The most common ones are:

Rodents are attracted to any place where there is sufficient shelter, heat, and food. Hoarder homes and houses occupied by squatters are often sites of rodent infestation, and they care common in homeless encampments.  (It is believed the LA typhus outbreak originated in a homeless camp near city hall, where the infected rats were first detected.) But they can show up just about anywhere.

Rats and mice are not just annoying – they can be a major health threat, not to be taken lightly.  If you suspect you have a rodent problem, we suggest first of all that you contact an exterminator to get rid of the pests. If your property is in our service area in the Pacific Northwest, we may be able to assist you with locating one. The next step is cleanup of feces and other contamination they’ve left behind.

Because of the dangers posed by contact with rodent droppings – or even inhaling dried matter – we urge you to contact a biohazard cleanup service company like ours to safely remove and dispose of the debris, then sanitize your property and return it to a safe condition. 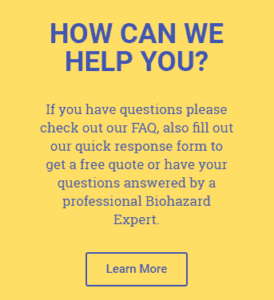